Things to Do/Explore in Pokhara

Pokhara is a popular and beautiful tourist city in western Nepal, nestled in the foothills of the Annapurna Himalayas. It's an ideal spot for soaking in the panoramic views of mountain ranges, lakes, and other natural wonders. Pokhara is the beginning point of most travel, trekking, and adventure activities such as boating, rafting, trekking in the Annapurna region, Paragliding, Bungee Jumping, Zipline flying, Canyoning, Annapurna Skydiving, and many more popular adventure sports in Nepal. The most popular Annapurna Base Camp trek, Poonhill Ghorepani Trek, and Mardi Himal Trek began from Pokhara city. Pokhara city is also called the city of lakes where you can explore the numerous beautiful lakes like Phewa lake, Begnas lake, Rupa lake and many more. Pokhara city offers a lot of things for travel enthusiasts. In this blog, we are trying to describe some of the most popular and widely visited things/places to do in Pokhara.

Sarangkot is one of the most popular vantage points in Nepal after Kalapatther viewpoint in the Everest Region that offers a magical sunset and sunrise view on the top of the giant Annapurna Himalayan range. A one-and-a-half-hour journey from Pokhara city will get you to Sarangkot Viewpoint. It provides a panoramic view of the Pokhara valley in the morning, as well as a stunning sunrise view and beautiful snow-capped mountains with a golden view from the first rays of the sun. Sarangkot is also the take-off point for Paragliding.

Pokhara has long been known for paragliding. There is nothing that can beat the experience of flying over the beautiful Pokhara city and exploring the beauty of the almighty Annapurna Himalayas range and stunning landscapes. You will fly like a bird and get a joyful aerial view of the beautiful Phewa lake, valleys, villages, and mountain ranges. In short, Paragliding in Pokhara is to experience unmatched attractive splendor as you share aerial space with Himalayan griffins, vultures, eagles, flying over beautiful Gurung villages, lakes, terrace land, and awe-inspiring mountains views on the northern side. 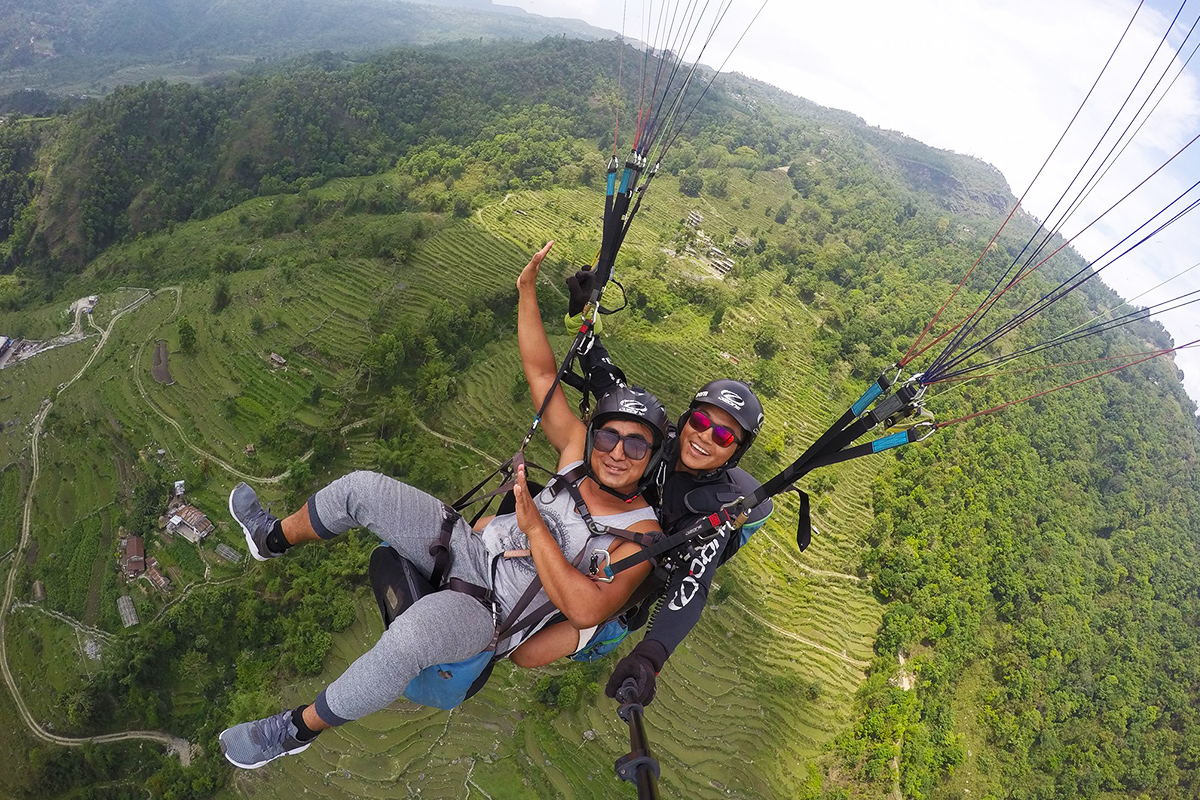 Besides Paragliding, many of you may be unfamiliar with the phrase "Parahawking." It's nothing more than a Paragliding ride with Egyptian vultures as your companions. During the flight, vultures descend on the hands of gliders, providing breathtaking views. Adventure, ecotourism, and conservation are all part of the package when it comes to parahawking. Although parahawking is not so popular, it is possible to do it in Pokhara during certain months around the year.

Pokhara is also known as the "City of Lakes" because of its numerous lakes. Some of the lakes include Phewa, Begnas, Dipang, Khaste, Rupa, and many other popular lakes. The reflections of mountain ranges on those lakes are pretty fabulous. If you visit Pokhara, be sure to go boating and enjoy the cool breeze. At Phewa Lake and Begnas Lake, boating services are plentiful and well-known. Besides boating, these days Kayaking is another popular water activity that you must do when you are in Pokhara.

Pokhara's notable caves include Mahendra Cave, Gupteshwar Cave, Chamere Cave, and others. Each of these caves has its own unique traits. If you enjoy seeing bats, go to Chamere Cave, while Gupteshwar Cave gives a glimpse of Davi's Falls from within. Mahendra Cave is one of Pokhara's most popular tourist attractions. When you visit Pokhara, don't miss out on seeing these caves and admiring their beauty.

Bungee Jumping is another popular adventure sport not only in Pokhara but also in Nepal. Nepal offers thrilling Bungee jumping such as Bungee in Bhotekoshi, Kushma Bungee jumping ( this is the world’s second-highest Bungee jumping), and a few others in Pokhara. You may experience an adrenaline rush in two locations in Pokhara: Hemja and Mahatgauda. If you're willing to travel a little further, you may also go bungee jumping at Kushma, Parbat. Jumping from hundreds of meters high and experiencing the free fall in between the mountains would be the best and most memorable trip for adventure seekers. This adventure is the must-do one when you are in Nepal.

Many people come to Pokhara to try their hand at zip-lining. A 30-minute journey from lakeside Pokhara will take you to the world's steepest zipline in Pokhara. The whole length of 1,850 meters is constantly ready to give you a thrilling flying experience. So, if you're thinking of visiting Pokhara anytime soon, make a plan to experience this amazing adventure.

Pokhara has a lot of museums. Some of the well-known museums in and around Pokhara are the International Mountain Museum, the Gurkha Memorial Museum, the Annapurna Butterfly Museum, and others. The Himalayan lifestyle, culture, and people are reflected at the International Mountain Museum. If you wish to learn about the traditions and culture of the Himalayan people, as well as the flora and wildlife, this is a must-visit attraction in Pokhara.

The Gurkha Memorial Museum in Lamachaur pays tribute to the warriors who fought in World Wars I and II. If you wish to visit the Gurkha Memorial Museum, you can take a cab or a local car. The cost of a ticket varies depending on where you are from. The entry fee is Rs. 20 for Nepalis, Rs. 100 for SAARC residents, and Rs. 200 for everyone else. If you are interested in learning about flora and wildlife, you might pay a brief visit to the Annapurna Museum at Prithvi Narayan Campus, Nadipur. If you wish to go there, you may take a local bus or a taxi from anywhere in Pokhara.

Canyoning is an exciting activity that involves descending through fast-flowing streams. If you enjoy playing with water, this is the place for you. It involves climbing, sliding, swimming, and other skills. Pokhara Canyoning is located in Kaski's Ghalel hamlet, around 20 kilometers far from Pokhara city. Taxis and municipal buses are readily accessible at all times. Kudi waterfall, Ghalel, is only an hour's drive from the lakefront. Canyoning in Pokhara is another must-do activity when you are in Pokhara.

Hike to the World Peace Pagoda and Pumdikot

Hiking to these two well-known places begins after crossing Phewa Lake by boat or from Chhorepatan. The Peace Pagoda, which is built in the Buddhist Pagoda style, may also be reached by taxi, although we prefer hiking over driving. It is located on Anadu Hill and is one of the greatest spots for viewing the grandeur of Lake Phewa and Pokhara city along with the mighty Annapurna Himalayan range. 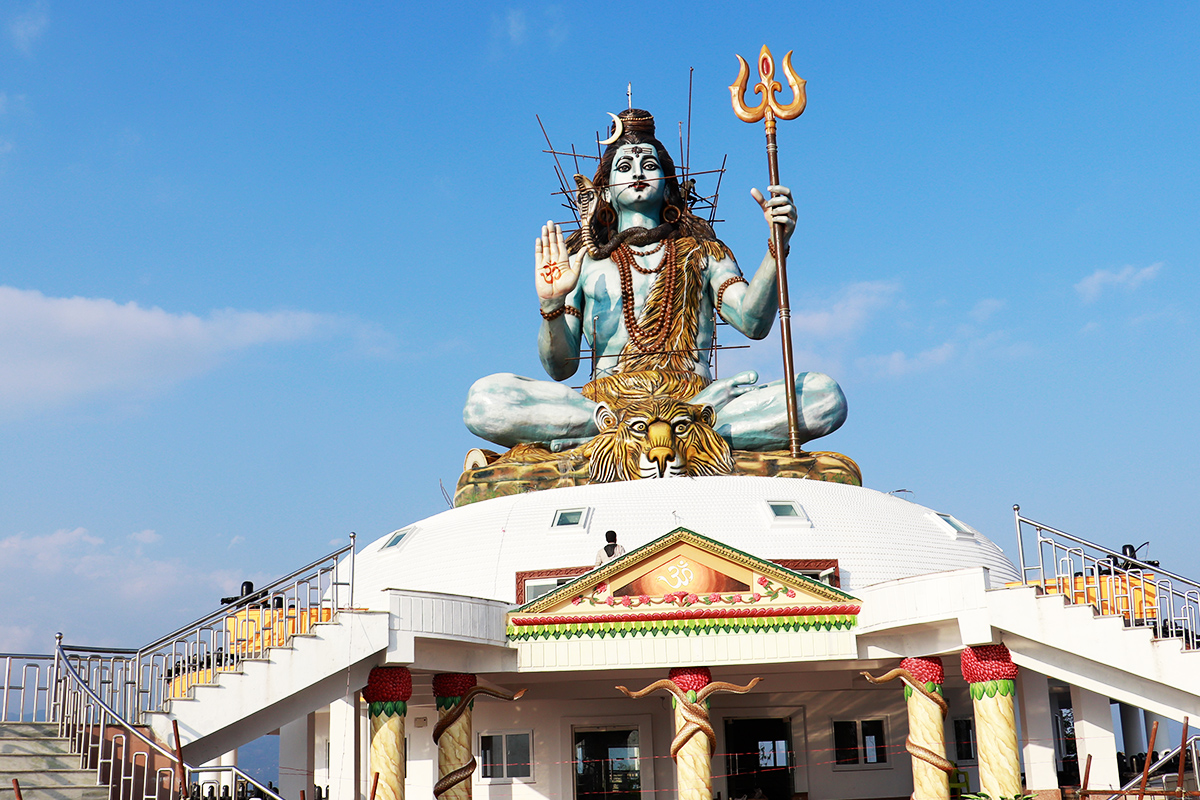 Pumdikot is another popular and newly established tourist destination in Pokhara. The 108-foot-tall Shiva monument at Pumdikot is the highest Shiva statue in Nepal. The Pumdikot offers a spectacular view of the Mardi Himal, Mt. Machhapuchhre, Mt. Dhaulagiri, Annapurna Himalayas, Phewa Lake, and Pokhara city. If you are resting at Peace Pagoda, you can go to Pumdikot within 30 minutes.

Pokhara's Devi's Falls, also known as Patale Chhango, is located in Chhorepatan, Pokhara. It is  500 feet long and runs towards Gupteshwar cave, with an unknown end. Phewa Lake is the major source of water for these falls. Devi's Falls is around a 15-minute drive from Lakeside Pokhara. When compared to the pleasure it gives, the entry fee is fairly small.

Pokhara is known for its temples, monasteries, and Gumbas. If you believe in God, you may pay a visit to Bindabasini temple, Tal Barahi temple in the middle of Phewa Lake, Matepani gumba, and other temples in Pokhara. Nepal is a secular country, so you can see Hindu Temples, Buddhist Monasteries, Church and mosques in different parts of the country including Pokhara as well.

Cycling around the lakeside and across the city allows you to get a clear grasp of Pokhara. If you don't own a bicycle, you may rent one from any location in Pokhara. A bicycle may be rented for roughly Rs. 150 per hour, which is a reasonable price. Riding on a bicycle along with the Phewa lake exploring the authentic vibes of the lakeside would be definitely worth it.

Skydiving is another thrilling activity that complements Pokhara's natural beauty. From a height of 11000–13000 feet, one may enjoy a magnificent view of the mountains, lakes, and the city. Jumping from the sky and experiencing the birds-eye view of the Kaski district including the Pokhara and Himalayan range is the ultimate adventure you can experience in Nepal.

You may arrange an ultralight flight and experience the breeze of gorgeous mountains up close if you wish to see the majesty of the mountains. The flight starts from Pokhara airport, and the packages range in length from 15 minutes to almost an hour and a half.

Yoga and meditation are available in several locations across Pokhara at a low cost. Depending on the course and location, the charge ranges from Rs 500 to Rs 1000 per day. You can choose any yoga retreats as per your need and desire. After finishing their treks, the majority of trekkers go to yoga retreats to relieve weariness and exhaustion. So, if you get tired of trekking don’t forget to try some yoga sessions and regain some energy for another trip. Besides this, you can go for Meditation as well. You can find several meditation centers in Pokhara or you can also hike/drive in some of the viewpoints from Pokhara and meditate yourself in the middle of nature. 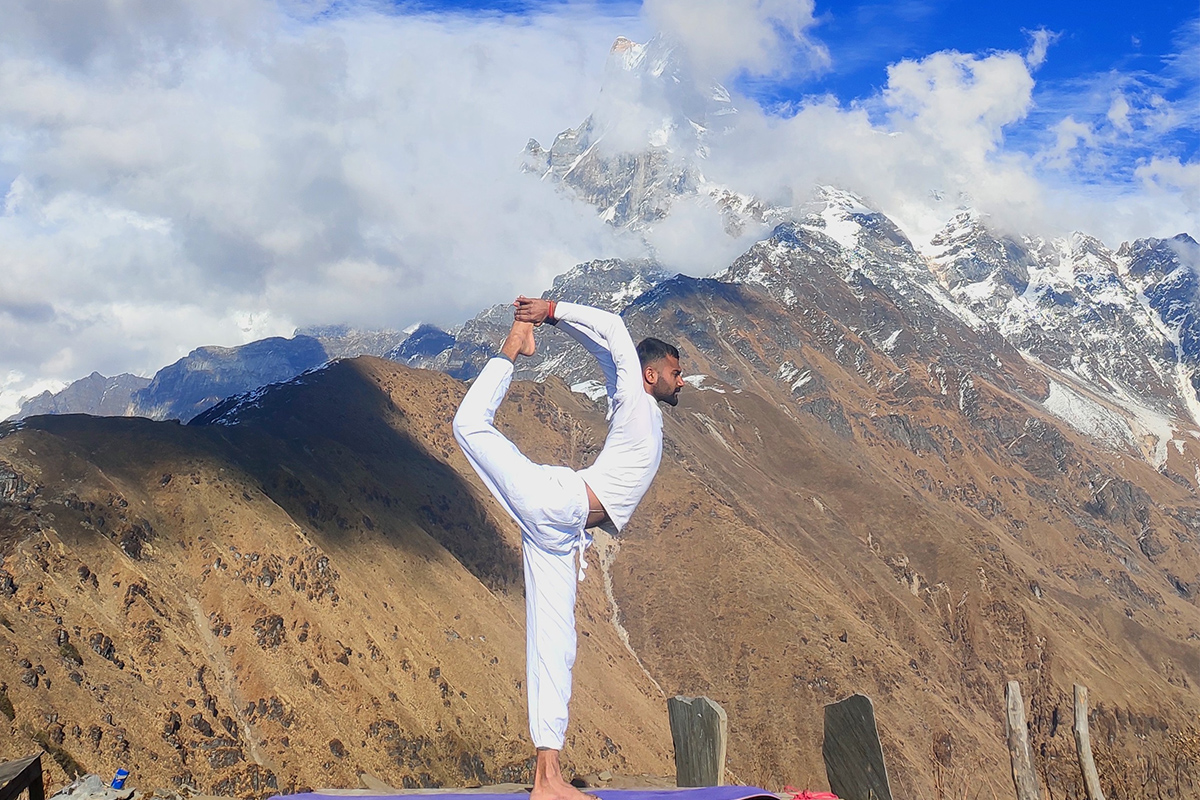 These are popular and must-do things while traveling around Pokhara. Besides this, you can do/explore many things such as city tours, food hunting, village tours, cultural excursions, swimming, and many more. Also, you can go for the heli ride in Annapurna Base Camp, Mardi Himal, Kapuche Glacier Lake, Muktinath Tour, and many short and long treks from Pokhara. If you are looking for customized and trailer-made trips to the Annapurna Region and any part of Nepal, feel free to contact us anytime.