Nepalese food incorporates a broad range of ingredients, crafts, and good attributes from its neighboring countries, with its own art and science of good eating chronology. Being a diverse country, the people of Nepal have many different ethnicities and backgrounds, and this vast influence is reflected in the country’s food culture. Nepalese dishes are commonly healthier than most other cuisines as they rely less on using fats and more on fresh vegetables, pickled ingredients, lean meats, and salads. Most Nepalese food concentrates on organic eating culture.

The most common ingredients found across Nepalese cuisine include lentils, potatoes ( particularly popular within the hills and the Terai region), tomatoes, chilies, garlic, turmeric, cumin, coriander, peppers, and mustard oil. Nepalese food is also considered an energy-giving food because of its genuine ingredients. Himalayan cuisine can keep our bodies warm in cold conditions. The hilly region is home to a wide range of ethnicities that give a cultural taste to their food. The Terai is home to various crops that wrap around the fertile lands. Nepalese cuisine is not just delicious but also colorful. You can’t stop clicking and eating when you seek authentic Nepali dishes.

Popular & Tasty Foods, You Must Try in Nepal

Dal Bhat Tarkari is the staple food of each Nepali household. A typical dal bhat recipe contains steamed white rice (bhat), lentil soup (dal), vegetable curry, and pickles. No worries, you can add side dishes like meat/fish if you are non-vegetarian. This meal is so fulfilling and is not heavy on your budget. You can find it anywhere in most local restaurants or homestays, tea houses, and hotels along with trekking trails. It is high in protein and carbs and is a common meal among trekkers. There is a popular saying called " Dal Bhat Power, 24 hours".

Dhindo/Dhido is considered the ordinary national dish of Nepal. The recipe includes slowly adding and stirring corn flour, buckwheat or millet to boiling water until it is semi-solid. This is only found in Nepal and you can find it in most Nepali cuisine restaurants. The entire set would cost anywhere from a dollar to five, depending upon the type of side dishes you want to add.

This food harbors its history centuries back. This traditional Nepalese food has become very popular in recent days. It is taken as a starter in many religious jatras and other festivals celebrated by the Newari community. So, if you were to come to Kathmandu, then Samya Baji is a must-try Nepalese food. The recipe includes beaten rice (chyura), black soybeans(bhatmaas), boiled eggs, fried potatoes, pickles, and salad. It is also eaten with 'Ayla’(a local alcoholic drink). Most of the fundamental ingredients are grown locally by the Newari people.

It is a sweet Newari dish prepared during Yomari Punhi (which takes place in November/December during the full moon day) by the Newari ethnicity in the hilly region of Nepal. You can find this mouthwatering dish in a few Newari restaurants. across Kathmandu, Lalitpur, and Bhaktapur cities. Yomari is made of rice dough with the stuffing of molasses and sesame, then it is steamed slowly.

Juju Dhau is a creamy, sweet, and viscous type of yogurt which is normally preferred as a dessert. This dish is made with buffalo milk and served in a clay pot. It is a must-try dish if you are visiting Bhaktapur city. We can find many street vendors selling King Curd on Bhaktapur premises.

Churpi (Hardest Cheese In The World)

This dish is the most unique and internationally recognized food item in Nepal. It is an immaculately traditional product crafted in the hills and Himalayan region by pasteurizing protein-rich milk and drying it to make it hard. It has such a scrumptious and unique taste because the milk is produced by the breed of male yak and female cow, also known as “Chauri”. The most famous and delicious Churpi is found in the Himalayas of Nepal, Ilam, Langtang, and Tibet Border. You can also find soft churpi in the markets of the Kathmandu valley.

This dish is a must-try for everyone visiting Nepal. It is one of the most loved food items in Nepal. Momos are small balls of white flour stuffed with veggies or meat. They are suited to different kinds of delicious sauces. Momos can be found in almost any restaurant across Nepal and cost anywhere from one dollar to three dollars, depending upon the restaurant and ingredients.

This dish is also referred to as Nepali Pizza. It is so called only because of its round shape and appearance. It is a rice flour thinly cooked with toppings that contain minced meat, eggs, coriander, chilies, and a lot of spices.

This dish is inspired by both Tibetan and Chinese cuisine. It is a noodle soup served mainly during the winter. It can include meat(goat, buffalo, chicken, yak), eggs, or simply just veggies. Along with a great taste, it provides us with the perfect nutrients we need and keeps our bodies warm during the winter. Thukpa is the most popular food during trekking in Nepal.

This huge meal consists of 84 different dishes. The word “Chaurasi” means "84" in Nepali, and “Byanjan” means food. This meal is usually eaten at weddings and you can also find it in some restaurants. This meal is a must-try food while you are in Nepal.

They are a famous Indian delicacy available also in Nepal. It is a mixture of mashed potatoes and spices sealed in a triangular shape made of white flour. This is then fried to make the outer layer more crunchy. This dish is served with tangy as well as sweet red-colored chutney.

Sel Roti is a traditional Nepalese doughnut-like bread that consists of rice flour, sugar, and butter. The ring-shaped dough is baked on both sides. This ring bread is usually served with tea and it is most popular during the Nepalese festivals of Tihar and Dashain and is a must-try food while you are in Nepal.

Choila is a part of Newari cookery. This food is spicy in taste and made with buffalo or duck meat. This is a hot and spicy dish served on a Newari platter. It is also a must-try food if you are visiting Nepal.

This is a side dish frequently accompanied by Dhido. Also considered the national food in Nepal, Gundruk is actually fermented or pickled green and leafy veggies. “Gundruk Sadheko” is commonly used as an alternate for pickles in rural belts. Also, hot “Gundruk Jhol” will be a mood changer in the monsoon and cold winters.

This soup consists of nine different types of germinated beans. This dish also has its cultural importance in Janai Purnima (full moon festival during the month of Shrawan). Quanti is ingested for its health benefits as it is rich in proteins and vitamins. The nine different types of beans are soaked overnight in water. The next day, water is drained and beans are allowed to sprout.

Tongba is also known as “Tibetan Hot Beer”. This famous local beer is poured on a wooden vessel and sipped through bamboo straws. This drink is millet-based spirits and is also a well-known traditional drink in Nepal. Winter is the best season to consume Tongba. 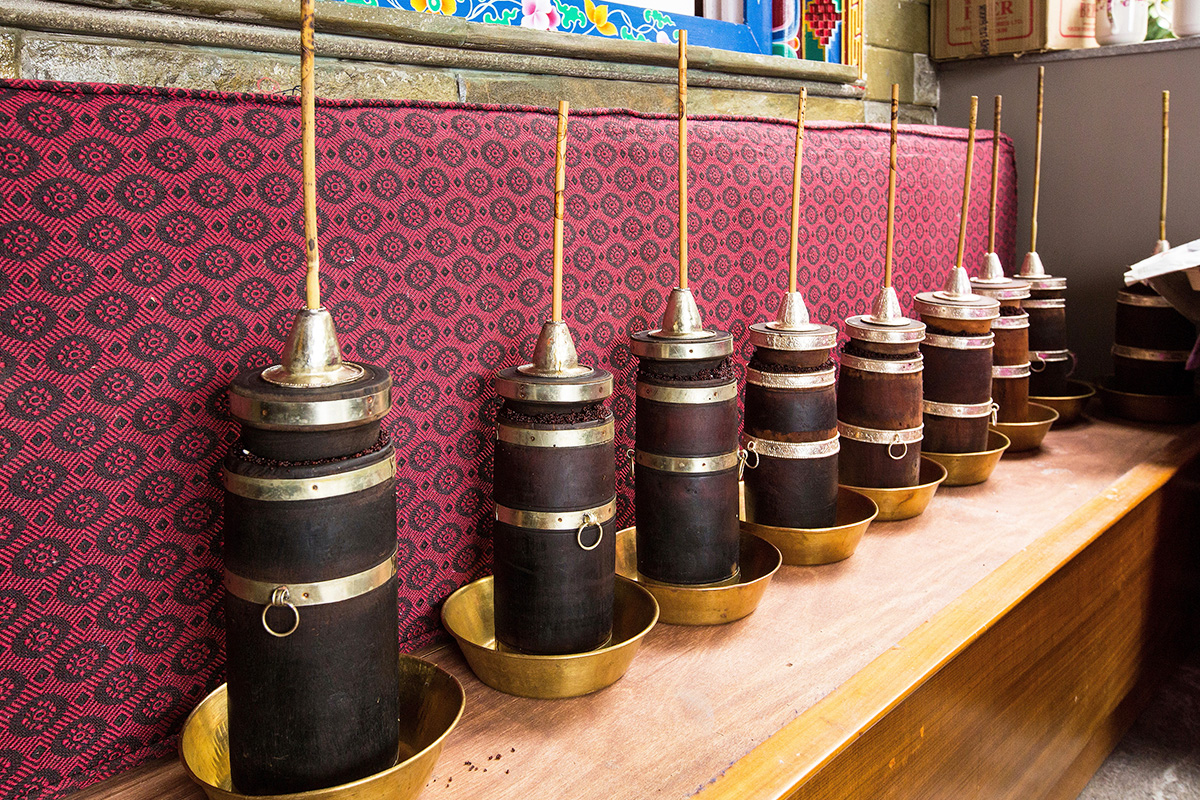 Chyang is a local Newari alcoholic drink made by fermenting rice. This drink is very famous among the Newari community and can be found in different Newari restaurants in Nepal.

It is mostly consumed by Tibetan Buddhists and is also called Tibetan Tea. This tea is made with yak butter, water, tea leaves, and salt and is enjoyed mostly in the Himalayan areas of Nepal. When you're trekking in the high Himalayas of Nepal, Tibetian Tea is the most abundant drinks for the trekkers.

It is a potent alcoholic quencher from Nepal that is usually distilled from fermented rice or millet. The flavor of rakshi may vary depending on the primary ingredient used. This spirit is mostly home-distilled in rural areas.

Mohi is another popular drinking beverage in Nepali rural areas. People put the milk for one to two nights in the local vessel called “Theki” (used in churning butter). After that, “Madani” (thick stick with turbines at one end ) is used to make curd into Mohi.

Things to know about the eating culture before visiting Nepal

Nepal is a land of eminent biodiversity and unique tastes. Make your food journey in Nepal more remarkable by dwelling on the corners of alleys, streets, and villages during your travels. Are you going to eat Momo ? Or maybe you can try Chatamari? Either way, leave feedback in the comment section or connect with us directly to experience more about Nepali food and beverages.