Wildlife in Everest Base Camp Trek

Nepal is a homeland of numerous exotic wildlife and biodiversity. A small country with diverse landscapes, geography, and climatic zone that offers so many rare and vulnerable wildlife across the country. Everest Region, especially during the Everest Base Camp Trek, the trail is extremely blessed with rich natural beauties, wildlife, and biodiversity. Everest Region has a few interesting wildlife, from the extremely rare snow leopard to the colorful Danphe. While trekking in Everest Region, encountering those animals is not easy during the peak trekking season. If you trek in the off-season such as winter ebc trek, post-monsoon ebc trek, and pre-spring winter trek, then there may be more chances.

At high altitudes and extreme climates, very little human life is possible. Likewise, the Everest region is also the inhabitants of a few rare mammals, birds, and reptiles. Because of this region, both the Nepal government and UNESCO World Heritage Sites in Nepal listed this region as the protected “ Sagarmatha National Park” which is also included in UNESCO World natural sites. Everest Region is the home of rare animals like Snow Leopard, Himalayan Tahr, Musk Deer, Clouded Leopard, Red Panda, and Wild Yak are the major highlights of Sagarmatha National Park. From this list, the snow leopard and Red panda are the endangered and exotic species in the world. These animals have thick fur and skin which helps them to protect from extreme climate and temperature. Some other popular animals like Blue Sheep, Pika, and Tibetan Gazelle are always seen at high altitudes. In the lower belt of the Everest Base Camp trek such as Lukla, Phakding, and Namche Bazaar, there is a dense forest where you’ll get a chance to experience a wide range of wildlife. In this blog, we tried to explain some of the most popular and exotic wildlife found during your Everest Base Camp trek.

The most abundant and commonly seen animal while trekking in Everest Base Camp is Himalayan Tahr which is found in the altitude range from 2,800 m to 4,200 m. This is commonly called a mountain goat as well. They have thick, reddish wool coats and backward curved horns. They can easily adapt to the harsh weather of the mountain as you can see them in a big group near Pangboche, Dole, Somare, Namche, and other villages. The male has a big beard and a bigger size in the body. 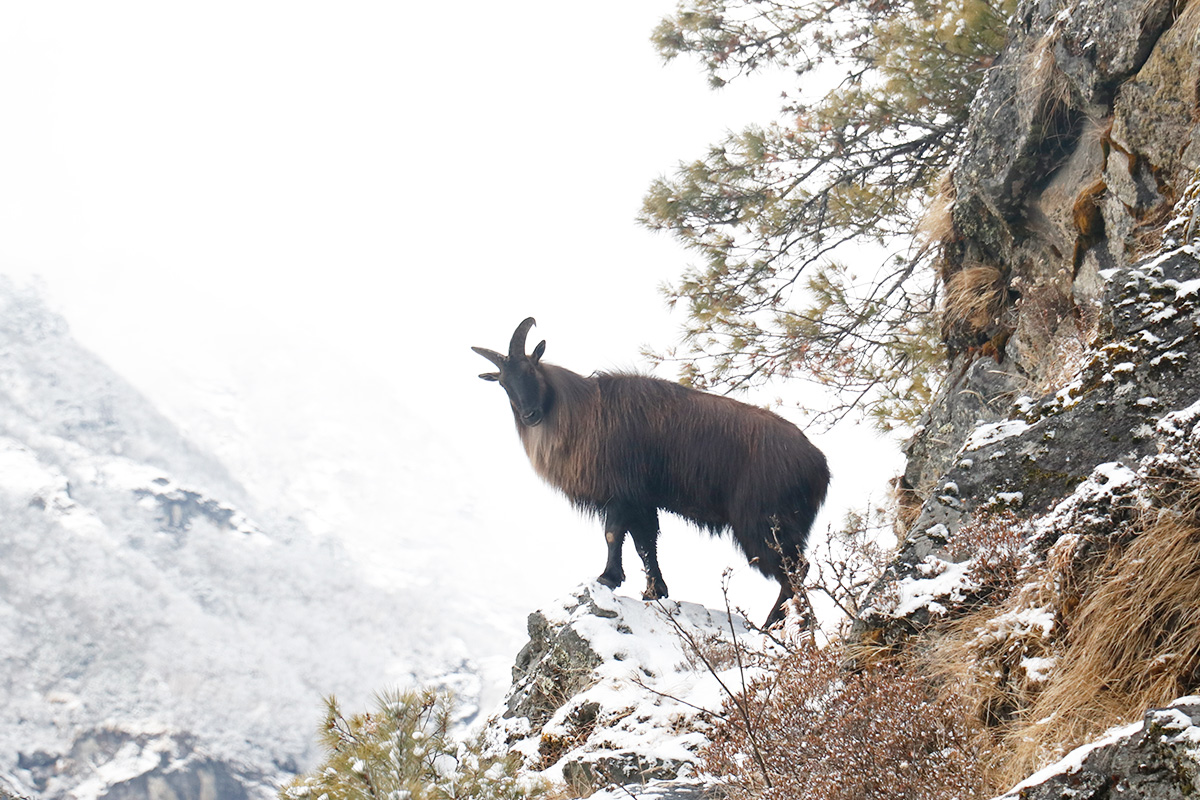 This is another attraction of the Everest base camp trek which is mostly seen in the terrain of Kyanjuma village, Debuche Village, Tengboche Monastry, Phortse, and Thame village. The white-bellied deer is listed on IUCN endangered animals list. The musk deer are usually shy with humans and hide in the dense green forest of Rhododendron. In another season they mostly graze a bit far from the villages and human settlements whereas during the winter season, they come out in open space for sunlight. This exotic animal is one of the most exciting things to do while trekking in the Everest region. 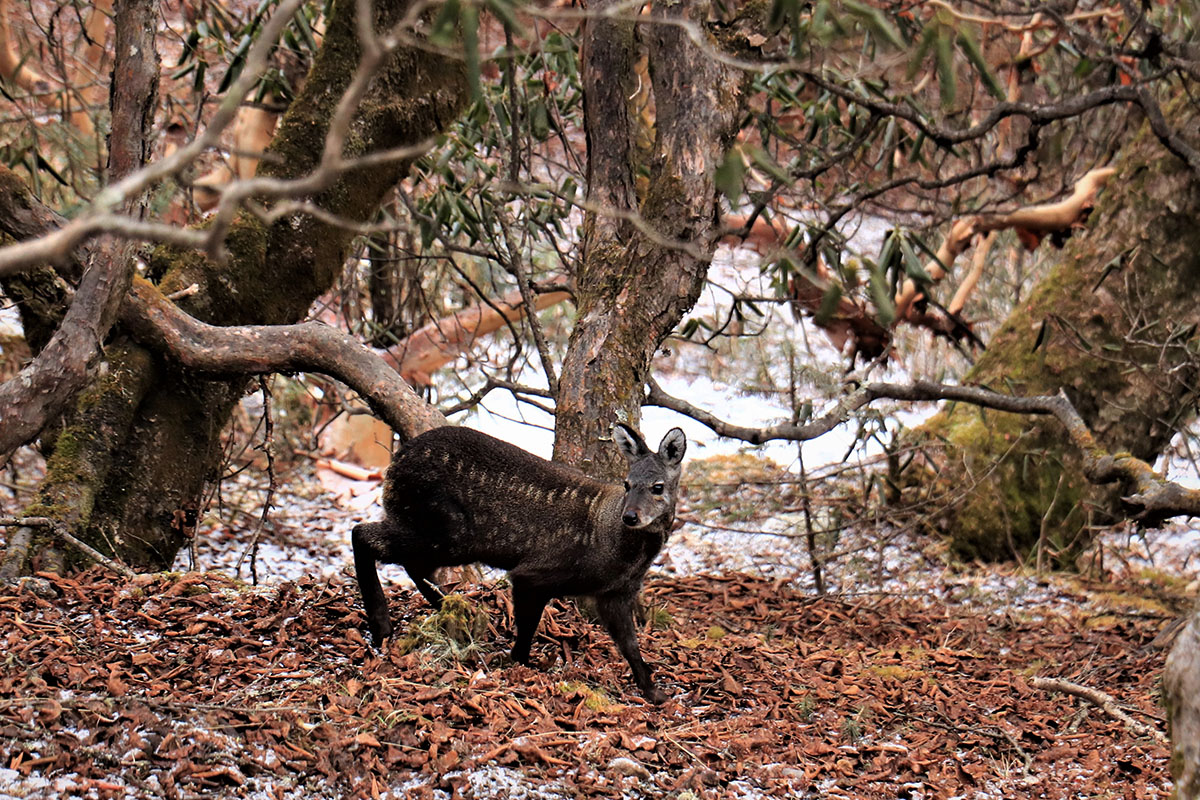 Red Panda is the most exciting and wonderful endangered creature which is only found in Nepal and especially found in the lower Himalayan belt of Nepal. The bamboo eater has also been listed as an IUCN threatened species in the world as its number is getting less every day. Red Panda is shy in nature, cryptic, and elusive animals that are legally protected in most of the conservation areas and national parks in Nepal. Jhorsalle, Phakding, and Manjo are the most likely inhabitant of the Red pandas in the Everest Region.

The most exotic creatures of the mountain which is also called the “Ghost of the Mountains”. The deities of the high mountains are the rare and elusive small shy cats that are found around the high altitudes of the Everest Region. The snow leopard is well adapted to the extreme weather and coldness. They are rare to see as they hardly come near the human-settled areas and trails where people pass. Snow Leopard is also listed in the IUCN threatened species and is mostly seen in Gokyo lakes trek sides and Thame village. But, sometimes if you are enough lucky, you can encounter these exotic creatures.

Mountain Yaks are another name for the Himalayas and especially in your Everest Base Camp trek, Yaks are the most cherishing mammals across the trails. These animals are born to survive and live in high altitudes and extreme climates. These animals can be used as a means of transportation in the mountain region along with their hair can be used to make the different kinds of warm clothes and duvets. Their horns can be used to make decorations in the home and tails can be used in different religious things. The milk can be used to make cheese and butter also. Besides this, at high altitudes, the houses and hotels used their dung as a fire to cook the food and make the dining warm. After Namche onwards, you can see numerous yaks grazing in different valleys across the Everest Base Camp trek. Nak is commonly called the female of Yak also. 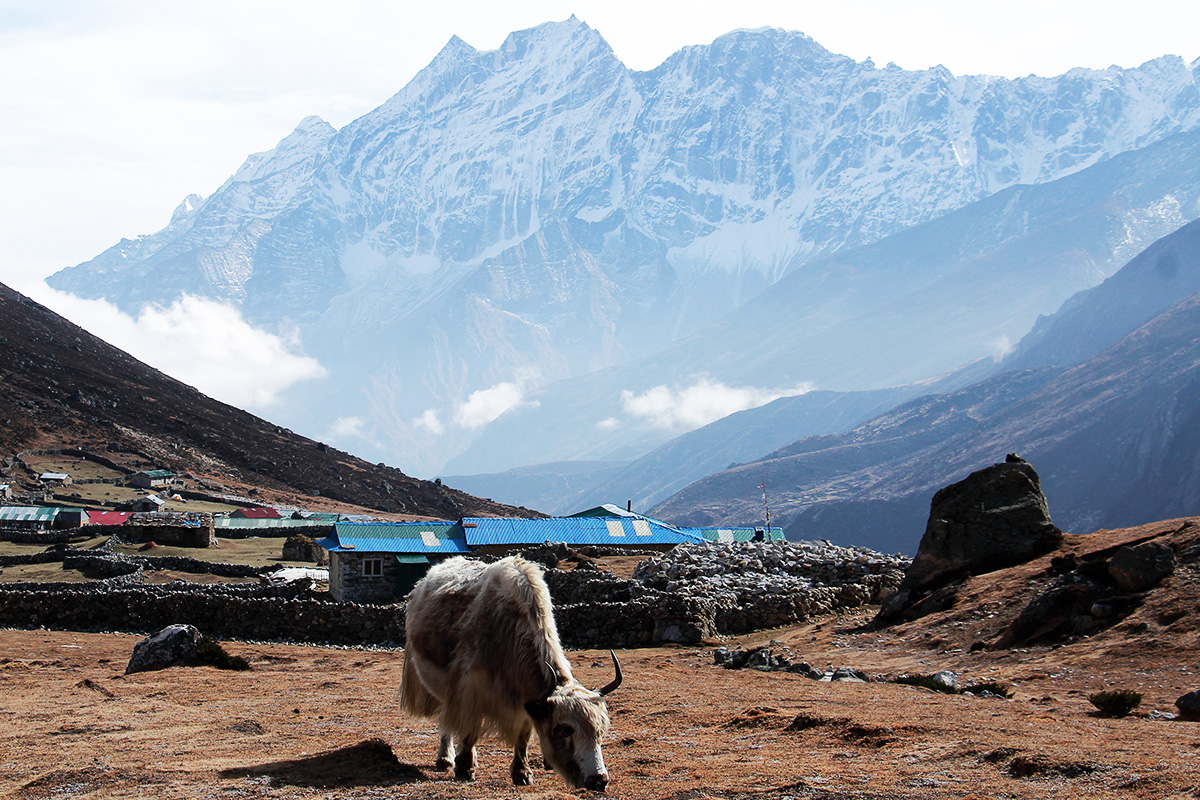 Everest Region is the home of the Himalayan Monal, which is commonly called “Danphe”. Danphe is also the national bird of Nepal. This colorful bird is normally found at an altitude of 2100 m to 4500 m. During the autumn season, you can easily see them on the way from Namche Bazaar to Kyanjuma village, Tengboche, Dole, and Thame village in the Everest Region. They are normally spotted in a sunny part of the mountain region, where they come to graze and take warmness. They normally descend to lower altitudes when winter occurs. 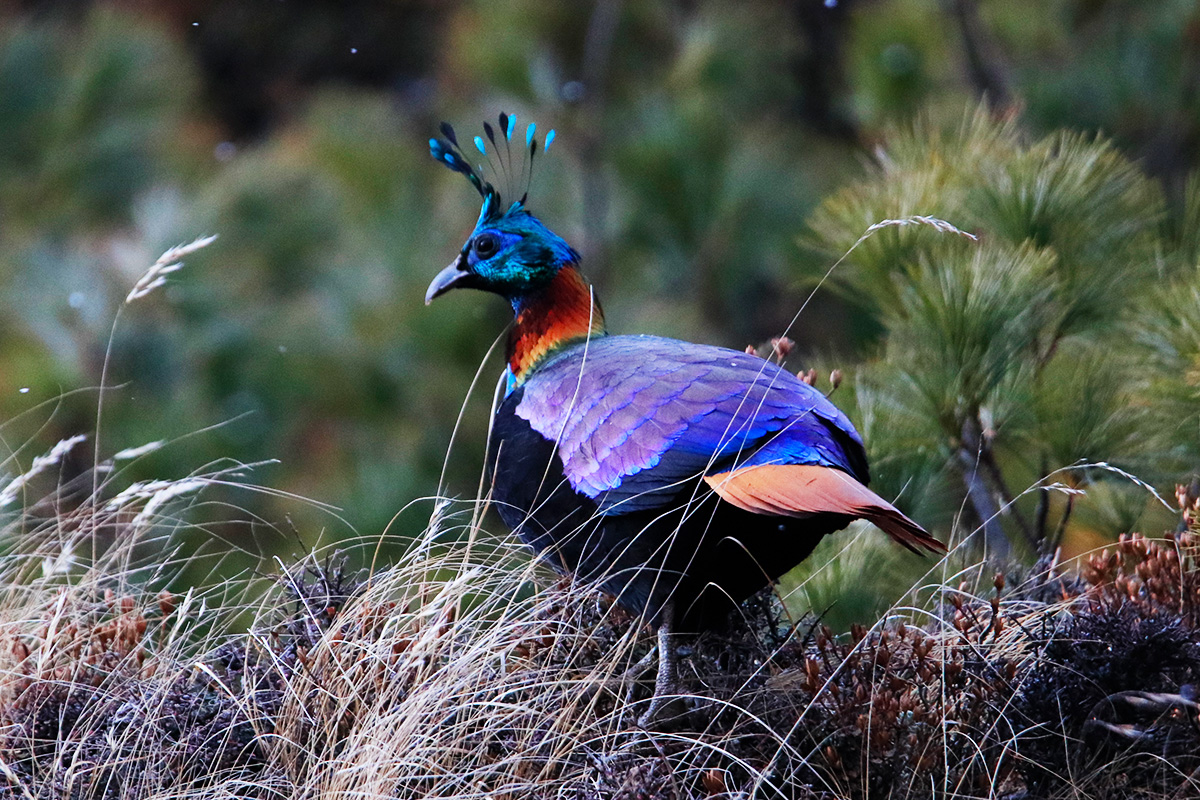 Another beautiful creature of the mountain is primarily called the Tiger of the bird kingdom, which is a widely distributed species of eagles. The giant dark brown makes its own hunting territory like a popular Bengal Tiger. The golden eagles are regarded with great mystic reverence in some ancient tribal cultures. While trekking in Everest Base Camp, you can see Golden eagles at Namche, Tengboche, Pangboche, Pheriche, Thame, and sometimes at Gokyo valley also.

The non-migratory high altitude bird with a greyish head and white crescent patch behind the eye and a white underside is another attraction of the Everest Base Camp Trek in the Khumbu region. During late autumn and early spring, you can easily find them near the trekking trails of Dingboche, Lobuche, Pheriche, and Dzongla. These birds are not shy like other birds, if you feed them with dry nuts and other edible foods, they can easily come near to you. They usually graze near the human settlements and tea houses and lodges. They are capable of living in high altitudes and extreme weather conditions.

Another colorful bird that is mostly found between the elevation range from 2800m to 4000m in the Everest region is another cherishing thing while trekking in the Khumbu region. The blood in its name comes from the fact that its face, eye, and tail are crimson in color with a short-tailed beautiful bird. They are normally seen in the forest of Tengboche, Namche, Phortse, and Dole in the Everest region trekking.

Besides these beautiful animals, and birds, we can see hundreds of other varieties of wildlife in the Everest Region such as Himalayan Black Bears, Marten, Blue Sheep, Pika, Mountain Weasel, Marmots, Griffon Vulture, and other numerous other animals that make Sagarmatha National Park as their habitat. The rich wildlife in Everest Region is the major aspect that many tourists like to trek in this region including snowy peaks, rich Sherpa culture, diverse landscapes, festivals, and amazing biodiversity. If you want to know more about the Everest Region trekking with us and if you want to explore the encounter with these animals, feel free to contact us anytime for the amazing packages with handsome discounts.